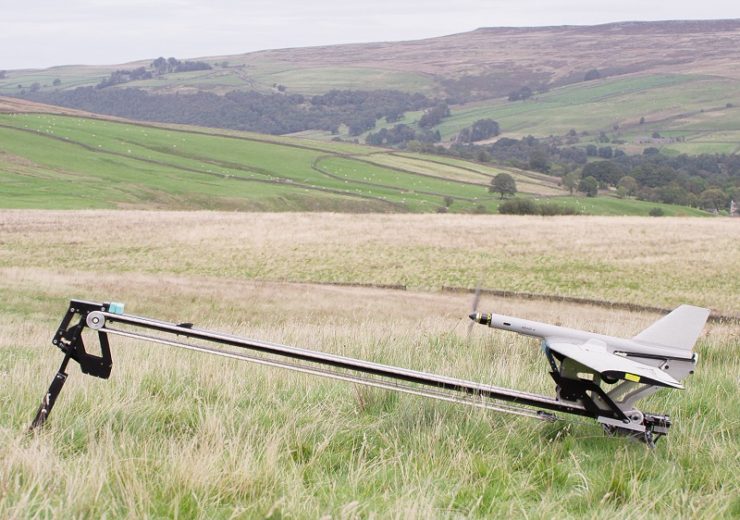 From rounding up sheep to checking on crop health, drones are promising to bring farming into the 21st century – but they’ll require strong 5G connectivity.

And while the major telecoms providers aren’t expected to link up rural areas with the same ultra-fast speeds enjoyed by city-dwellers any time soon, a group of small UK businesses are hoping to bridge the gap by proving the business case for investing in rural infrastructure.

Operations director Gavin Goudie’s company Blue Bear Systems Research has built a fixed-wing, battery-powered autonomous drone that can connect to sensors strapped to livestock and buried into soil to give real-time feedback on animal locations and ground conditions for farmers to use.

He said: “5G is a very important element because it provides a very robust communication system between the ground and air.

“At the moment, we can’t operate drones beyond visual line of sight, which is typically about 500m, so 5G will be a key enabler for us to go beyond that.

“Also, a farmer could be a custodian of the drone used for crop surveys, and someone hundreds of miles away can take the data from the drone and give the farmer the answers they want immediately as a service.

“There’s this impression that technology is taking away jobs in agriculture but we’re making it easier for farmers.

“We can certainly reduce the time they need to spend out on the field – where they might drive five miles to close a gate, they can potentially do that with a drone system.”

How 5G in farming works

A partnership of small businesses and universities lead the 5GRIT project, which costs £4m and is part-funded by the UK’s Department for Digital, Culture, Media and Sport (DCMS).

Eventually, it aims to demonstrate a business case for the government and commercial operators to bring 5G to rural areas across the UK, where only 41% of homes benefit from complete 4G mobile coverage compared to 83% of urban homes, according to Ofcom’s 2018 Connected Nations report.

The 5GRIT team has tested how TV white space technology, which uses the vacant broadcasting frequencies in the wireless spectrum, could be adapted to deliver 5G broadband.

Between 2008 and 2012, the government switched off analogue TV signals and moved to digital, freeing up part of the TV radio spectrum.

Use cases of 5G in agriculture

Blue Bear Systems Research, based in Bedford, aims to use the 5G connectivity to enable its drones to communicate with sensors.

Equipped with a camera, the craft can analyse crop health and livestock locations by following a series of waypoints added by an operator to set out a flying route.

Goudie said the technology could be used to assess levels of acidity and minerals like nitrogen in the soil, understand why drainage is poor and equip farmers with the knowledge about the best places to spray pesticide in order to increase crop yields.

As the sensors are low-powered, disposable devices with maximum communication distances of about 10m, he said 5G would play an important role.

“You can get a bird’s-eye-view for a much better picture of what’s good and bad on a farm,” he added.

“The traditional method would be that you have a crop walker who will survey the farm to understand why he thinks the farmer is getting short crops in this field.

“They might say it’s because he’s not getting enough nutrients in the soil. That’s then reported back to the farmer but he will only know that at harvest time as something to tweak next year.

“By using the technology, the farmer can be much more proactive and spot these problems earlier to do something about it during the season, rather than learning from it retrospectively.

“When it comes to livestock, it’s not just about monitoring how many cows there are in a field but understanding why a certain cow is on its own and why it’s in this field rather than another field.

“There’s an opportunity to make the process of farming more efficient but also reduce the risk of accidents.”

Adam Watson, who works on his dad’s farm near Alston, Cumbria, has had radio equipment fitted on to his shed to transmit a 5G signal for a three-mile radius.

He is now working with the consortium to trial Blue Bear’s drones used in agriculture.

“The animals don’t like the bad weather any more than you or I, and we can do more harm than good by shepherding them.

“But if you can fly a drone to check on the animals without disturbing them, it would save time and be easier for myself because I’m not going outside getting soaking wet.

“I could spend more time with my family or even go away for the day and do the shepherding from somewhere else.”

Given that Watson spends most of his 12 to 14-hour day on a farm working alone, he is conscious of the dangers that are involved should he flip his quad bike and no one being around to sound the alarm.

The father-of-two said: “There used to be a lot of people employed on farms but now much of it’s mechanised so there can often only be one person on the bike out shepherding.

“No-one knows where he’s at and it could be ages before anyone raises the alarm. But if you could get a drone out to locate someone, it could save their life.”

For the past three years, Watson, whose 1,500-acre upland farm includes 1,000 breeding ewes and 40 pedigree cows, has applied technology in the form of Moocall calving sensors that are strapped to a pregnant cow’s tail that predicts when she is most likely to give birth and can prevent any problems from occurring.

“That’s already made a massive difference,” he said. “You just need to save one calve and it’s paid for because if you lose one it’s a potential £1,000 loss at least.

“With the way the industry is at the moment, agriculture is run on a very tight ship at the moment anyway so it’s really important.”