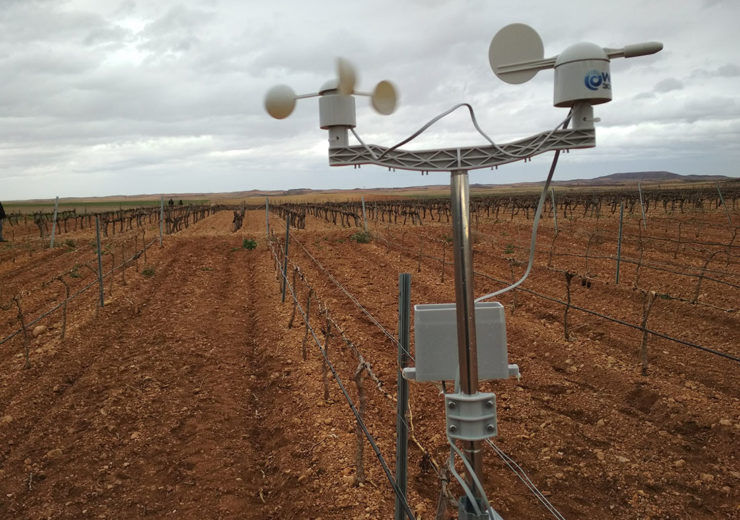 Ibercaja and its technology partners installed sensors in vineyards to collect data for farming (Credit: Libelium)

Ibercaja is more used to handling loans and mortgages on a daily basis – but its latest project found the Spanish bank taking a leap into smart farming.

The Zaragoza-based group worked alongside tech companies including Microsoft to build Agrotech, an internet of things (IoT)-enabled platform that helps agronomists save millions of litres of water each year.

Taking detailed data collected by intelligent sensors placed in vineyards, it delivers real-time insights about weather and moisture conditions to farmers to help them make quick decisions that save natural resources and improve wine production.

As the eighth largest bank in the country and having lost physical contact with its rural customers due to the expansion of online banking, Ibercaja believed the project – introduced in north-east Spain earlier this year – would create a new business model and diversify its services.

Guillermo Renancio, IoT director at EFOR, which developed the technology for Ibercaja, told the IoT Solutions World Congress in Barcelona last month: “We wanted to provide a good service for young farmers in particular as a way of democratising technology because many of them don’t have the opportunity to use good tech.

“We thought about what farmers really want – not just today but for the next 10 years.

“In Spain, we have a lot of problems with the use of water and dried out land. We don’t have a lot of resources to manage our crops or plantations very well.

“So we wanted to provide something that could make these farmers’ lives a little bit easier.

“When we think about innovations, we often jut think about the big cities so it’s important to consider how those living in rural areas will be served by technology too.”

Why Ibercaja got involved in farming

Ibercaja – established as a savings bank in 1873 – has 1,100 branches, employs more than 5,000 people and has three millions customers in Spain.

“The environment has changed a lot and we’ve seen how customers have changed their behaviour.

“We also have technologies like 5G, AI and IoT changing society, while banking is being transformed by fintechs.

“So there were two factors we needed to consider – differentiation and the ability to adapt.”

“Twelve months ago, we weren’t experts in cloud computing and IoT but we just needed to find the best partners – and then developed our knowledge of the farming sector,” he said.

“The solution we came up with a year ago isn’t exactly the same as it is now because we’ve learned from tests and improved it.”

How the Ibercaja Agrotech project works in farming

Vineyards across the world are beginning to use IoT technology to understand how temperature, rainfall, sunlight and wind can affect the physiology of grapes used in wine production.

Knowing these aspects in advance can help oenologists to better calibrate the different parameters that determine the character and quality of the wine.

Ibercaja tested Agrotech on sites in the Aragon region of north-east Spain – an area renowned for wine-growing – with the aim of improving productivity and decision-making for agronomists – while saving time, money and natural resources.

Sensors autonomously measure variables in fields such as soil moisture and wind speed, feeding data to the cloud-based platform where it is analysed by Microsoft Azure AI technology.

Farmers can then access a dashboard with this information to make decisions on how to consume natural resources more efficiently and know when is the best moment for sowing, irrigating, fertilising or harvesting.

Royo said: “The farmer can see at a glance on a web or mobile app all the most important information with about eight or nine variables they picked out as being valuable insights.

“We send reports for things like rain, wind, humidity, soil moisture and temperature. The user can go into each variable and see more specific information like dates and fields.

“Then if the temperature goes above 50C, for example, the user will get an alert and can make a decision on how to react.

“It’s very useful for our customers because it’s easy to use and they can be at home, in the field or anywhere they like to get the information.

“We can adapt it to the needs of each farmer but the most important thing is the philosophy of democratising the technology for farmers.”

The Agrotech platform, which costs €100 per month on subscription, has helped farmers save water and electricity since it was launched on three sites in late September, while generating better crop yields, according to partners in the project.

This means they have been able to secure better prices and receive more income at harvest time.

Farmers can also track compliance with EU regulations and, over time, will be able to learn from benchmarks set by other farms and previous years’ data.

There are plans next year to roll out the technology across several farms and find more use cases for the platform in other industries in the future.

Integra CEO Felix Gil Martinez added: “We’re in a world of constant change and every company will have to open its mind to change.

“In this case, Ibercaja is providing a tech solution in order to improve the lives of farmers and it’s a great example of an industry evolving.”