John Deere spent $1.78bn on R&D over the last year, as it looks to introduce new technologies to the market 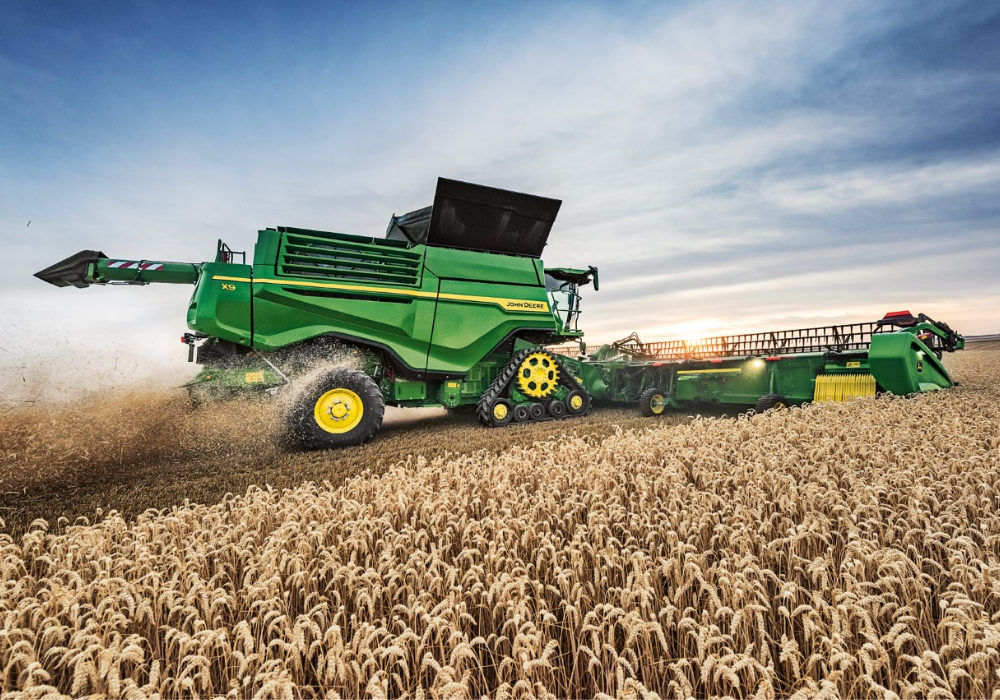 John Deere has ramped up its R&D in new technologies as it looks to introduce drones and autonomous machinery to the market. The firm’s UK and Ireland managing director Jonathan Henry talks to James Murray about those innovations and the future of farming as a wider concept.

Impacting on every one of the world’s 7.7 billion people each day, agriculture is an industry like no other.

New methods may have changed the way farmers operate, but the world’s reliance on crop and food production has never waned.

Helping businesses meet demands has been manufacturer John Deere, which is widely recognised for the role it has played in the advancement of agricultural machinery over the past 182 years.

But alongside the US company’s tractors and combine harvesters, it is now exploring innovative technologies that could be set to shape the future of farming – including drones and autonomous machinery.

John Deere UK and Ireland’s managing director Jonathan Henry says his company is taking steps to ensure farmers are provided with the best possible equipment to improve their businesses.

“We are investing heavily in new technology, not just in machinery but in augmenting our products by using precision agriculture and big data,” he explains.

“It’s a two-pronged approach – one is building the technologies and tools, as well as making them robust and offering a scientific operation for end-user farmers.

“But it’s also about how we support them in making sure they achieve the desired outcomes through our dealers and making sure they are investing in the right talent to be able to install these systems and support customers.”

What is John Deere?

A blacksmith named John Deere started the US company in 1837. It has been headquartered in Moline, Illinois, for almost its entire lifespan and employs almost 75,000 people globally.

It began production in Europe in 1956 and has been operating in the UK and Ireland for more than 50 years. The firm can lay claim to being one of the global market leaders in terms of tractors by brand and manufacturer.

When it comes to modern technology, John Deere says it was the first firm to offer a differential global positioning system (DGPS), which provides improved location accuracy to standard GPS signals.

Henry says: “That helped put the company into a very strong position for guidance systems for farm machines.

“It enabled customers to invest in the hardware to guide their vehicles and have equipment embedded in their machines that helped them harvest data from the crops as it passes through the field.”

It also has a global forestry division and purchased a construction business in 2017, which claims to be the “global leader” in road-building technology.

As a major agricultural manufacturer, John Deere has a huge role to play in how the future of farming will look.

For Henry and his team, it has set about understanding where corporate customers in particular could unlock value and improve sustainability using technology.

He says: “If we take precision agriculture and look at the opportunity there, most of what we saw in the early 1990s is still sitting there untapped – and it’s our goal to work with farmers to help them unlock that.”

While once the focus was on building the next state-of-the-art tractor or combine harvester, John Deere is now collecting data insights from the machine that’s already in operation to help farmers.

Henry explains: “There are three value buckets to this – machine optimisation, which may involve automating things that are regularly controlled by operators in the field; job execution, where we can document what is actually achieved; and agronomic optimisation, which aims to share and unlock the value of data through over 140 partnerships we have in that space.”

The company has devised three strategies to help customers improve productivity in the future.

One of these is to replace hydraulics with electric motors, which offers greater precision in control, while another is in deploying artificial intelligence.

In this domain, the company bought California-based Blue River Technology, which applies machine learning to agricultural spraying equipment in order to improve detection of pests and weeds, in 2017.

The third area of the plan might sound the most controversial but for many farmers, it may also provide a welcome relief.

“We’re also looking at creating fully autonomous machines that would be used in broadacre agriculture – so that when it becomes viable to remove the operator from the machine, we can,” adds Henry.

Henry says John Deere recently displayed nine projects it’s working on at the international exhibition for agricultural machinery and equipment, Agritechnica, of which two were drone-based.

“One was a drone swarm system, where we actually have a drone hive that emulates a beehive,” he explains.

“The concept there is that the drones can operate autonomously, return to the hive, and switch their own batteries because they have a 30-minute flying time.

“They can go off again and load themselves with active ingredients. They can use remote mapping to scan an area and decide where best to apply herbicide, fungicide or insecticide.

“They can selectively treat a very large area of up to a 30-mile radius – from one drone hive.

“There is clearly going to be some legislation requirements like there is around drones used by the general public, but we need to make sure that it doesn’t restrict the good use of that type of technology.”

Jonathan Henry on the cost of John Deere’s technology

Research and development of new technology is usually a costly business and John Deere is putting a lot of time, effort and consideration into its new projects.

The company’s worldwide net sales and revenues increased by 5% in the 12 months to November 2019 to $9.9bn and $39.26bn respectively, which goes alongside its increase in R&D spending from $1.66bn to $1.78bn over the previous year.

Henry, who believes farming machinery is about as green as on-road vehicles right now and with environmental advancements on the way, claims John Deere isn’t afraid to take risks in advanced technology.

He adds: “If we were building a new tractor, then, of course, we’re always taking risks when we invest in R&D.

“But the bit that we peeled off and spent in the advanced space is intentionally in a more risky area.

“This is going to sound wrong, but if we don’t have enough failures, we probably weren’t pushing the boundaries enough in that space.

“Whereas once we’re in a product programme and we’re building a new combine harvester or a new tractor, then we don’t want to see failures.

“We are trying to have processes and drive success without failure, but we need a different attitude when we’re working in that advanced space – otherwise we’re not trying enough new things and we’re just doing what we’ve done before.

“But of the other seven, maybe only one or two of them will make it – it might be none of them in the current form that we exhibited them.”

There’s about 7.7 billion reasons it could be worth taking more of these risks.