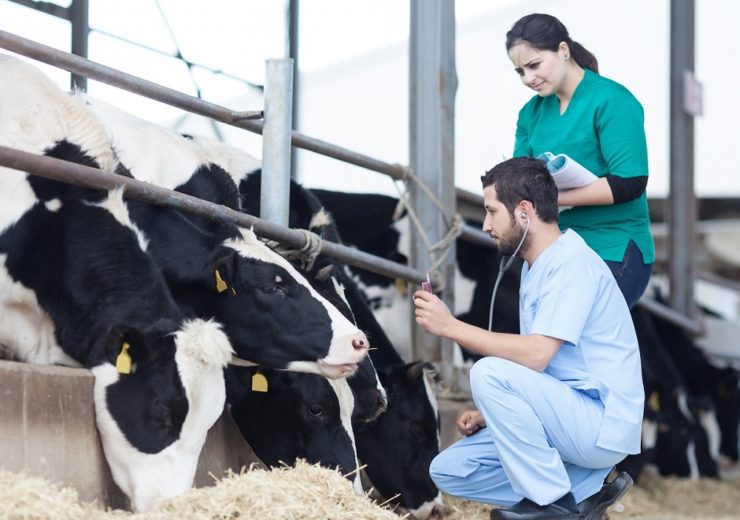 Libelium's sensors were able to measure how nutrition and environmental factors corresponded with milk production on a dairy farm (Credit: Libelium)

The internet of things is a popular buzzword in the world of tech, and for Libelium it has presented opportunities to transform industries as diverse as healthcare, education and the environment. But it’s in developing smart agriculture practices where the Spanish company has arguably had the most success, as co-founder Alicia Asín explains to Dan Robinson.

“In this new digital revolution, agriculture is the least ‘technified’ market.”

Alicia Asín should know, given that her company has helped put the word “smart” in front of factories, cities, environment, water and even parking throughout its 14 years at the forefront of the internet of things (IoT).

Libelium’s projects have varied from monitoring water quality in Russia’s heavily polluted Volga River using a water drone, equipped with sensors to take readings in a reservoir, to predicting when asthma attacks might happen in children by tracking air quality conditions in play areas.

And just last month, it hit the headlines after supplying a sensor platform to geologists monitoring the impact of climate change on the stability of terrain surrounding Tutankhamun’s tomb in Egypt’s Valley of the Kings.

But it’s in farming where the Spanish firm, which both designs and manufactures these wireless sensor network devices, has perhaps been most active due to the challenges faced by the industry.

“You have to deal with connectivity and battery power issues,” says Asín, who co-founded Zaragoza-based Libelium alongside David Gascón in 2006.

“Until we had battery-powered, wirelessly-connected devices, it was very tricky to take all those measurements in a field.

“There’s been a cut in prices for this technology. I remember 15 years ago, the technology available to farmers was very expensive – you’d have to spend €10,000 for a single connection point in a field.

“Then there’s the slope of the area – facing north or south means totally different measurements.

“So in some cases we see some resistance to introduce this technology because it’s easy to add it into high-value added crops like fruit or cereals, or big extensions of fields.

“In Spain, the agriculture system is very small portions of land separated by different owners, which makes it very tricky to make investments.”

Use cases have ranged from increasing milk production on a dairy farm to keeping the water in fish farms clean, making agriculture one of the top markets for the company’s sensor IoT hardware and software.

Libelium’s technology helped to increase daily milk production by 18% at a dairy farm in Russia.

The pilot at Voshazhnikovo farm, near the city Yaroslavl, in November 2019 resulted in each cow growing its milk production from 28 litres to 33 litres every day.

Asín says: “It’s an amazing increase just from identifying that under lower temperatures, we needed to give the cows more food to produce more milk.”

Farm workers receive mobile phone notifications about environmental or nutritional changes, which could help Voshazhnikovo to save €340,000 ($372,000) in feeding 2,000 cows over a 180-day period.

There’s hopes that smart farming – alongside advancements in machine learning and genetically-modified cattle breeding – could help Russia reverse its milk deficit, which is one of the largest in the world, according to the UN’s Food and Agricultural Organisation.

Water use has been reduced by between 20% and 30% on a major Australian farm by learning the best times for irrigation and limiting evaporation.

AJ Bush and Sons – one of the country’s largest meat manufacturers and oldest family-owned businesses in the industry – deployed Libelium’s soil moisture sensors in a wastewater irrigation area at its Queensland rendering plant, which processes both red meat and poultry by-products.

“AJ Bush wanted to reuse as much water as possible from feeding animals so it could create a circular economy process and give that water to the crops for irrigation,” says Asín.

The company’s Plug & Sense! smart agriculture technology provided real-time data that guided how irrigation systems were turned on and off by using soil moisture as a key indicator.

Managing soil moisture is regarded as essential for protecting groundwater from nitrate contamination.

AJ Bush managing director David Kassulke says: “It is so much better knowing what’s happening in your soils and waterways by getting real-time data compared to the old ways of sending samples to the lab and waiting for weeks for the results, and not knowing in the meantime what’s going on.”

Asín adds: “IoT technology can respond to the growing demand for reuse of waste water in industry to reduce productive costs and the environmental impact that arises as a result of manufacturing activity.

“Investment in wireless sensor networks connected to industrial processes can provide objective data that will improve strategic planning, decision making and support a return on investment.”

Up to 60% of crops are grown with the use of fertilisers but it’s common knowledge that the chemicals and minerals found in synthetic versions can be bad for the planet.

Substances like nitrates and phosphates can pollute lakes and oceans through rain and sewage, harm drinking water, and create greenhouse gases that contribute to climate change.

That’s why Libelium’s services have been used to change the way fertilisers – which are also expensive for farmers – are used.

Reflecting on a project at a north-west Spain farm that reduced its usage, Asín says: “We wanted to justify every drop of fertiliser being used by analysing how much would be needed in crops just by monitoring soil moisture, temperature and humidity.

“It’s capable of forecasting a number of different diseases and definitely helps to make better-informed decisions on whether to use fertiliser or not.”

“This information can be used to help predict the likelihood of infection or plague risks before they happen, allowing vineyard managers to take action proactively to minimise the impact.”

The project launched in 2012 and from a pool of 1,000 wine growers, about 400 became habitual users during the first year.

They were able to reduce phytosanitary treatments such as fertilisers and fungicides by more than 20%, while improving growing productivity by 15%.

Edurdo Diaz, project manager of the multinational consultancy Idom, which led the scheme, believes both were important in making the wineries more profitable and eco-friendly simultaneously.

He adds: “That’s important for health reasons, of course, and it also helps the image of Rias Baixas growers and the region’s Albariño wines. It’s a good form of promotion.”

Diseases have been kept away from ponds at a Vietnamese fish farm by using IoT technology.

Libelium’s sensor platform was used by PHA Distribution, one of the South-East Asian country’s largest IoT and ICT distributors, in a wireless sensor network that has monitor various parameters in real time to control water quality – and improved both the quality and quantity of production.

The technology was deployed at a fish farm next to the Mekong river in Thanh Binh District, Dong Thap Province, and assesses parameters such as temperature, conductivity, dissolved oxygen levels and acidity.

Vietnam is one of the world’s largest producers and exporters, offering up about 5.7 million tonnes for exports each year at a value of $1.7bn.

PHA Distribution managing director Tran Vinh Phong says: “Real-time monitoring allows us to help our end clients to be aware of preventable diseases in order to save costs in diseases treatment and keep fish in good health before harvesting job, as well as mange fish loss to the minimum rate.”

Ordinarily, 40% of adult fish – worth $1.50 each on average – usually die in a 5,000 sq m, 4m-deep farm that produces 30,000kg every six months, owing to preventable diseases that could be avoided if water quality is controlled.

But there’s hopes real-time monitoring, which began in 2016, could eventually cut down the number of fish lost by between 40% and 50%.

While Libelium is also heavily involved in vertical markets including smart cities, smart water, smart environment, smart factories and e-health, Asín believes its work in agriculture is perhaps among the most important.

Part of this is about making food production more sustainable and wide available – a key pillar of the UN’s Sustainable Development Goals – by improving crop efficiency.

But there’s also a very personal impact stemming from all this, too.

“At the moment, we’re just monitoring the economic impact, such as how many litres extra we’re producing each day, or how much fertiliser or water we’re saving,” Asín adds.

“But there’s also factors to consider like improving the life conditions of farmers who need to spend long hours in fields looking after crops.

“By having technology that can allow you to monitor crops remotely, it makes their life easier, while it also gives them certainty about how much they’ll be able to sell to their buyers.”