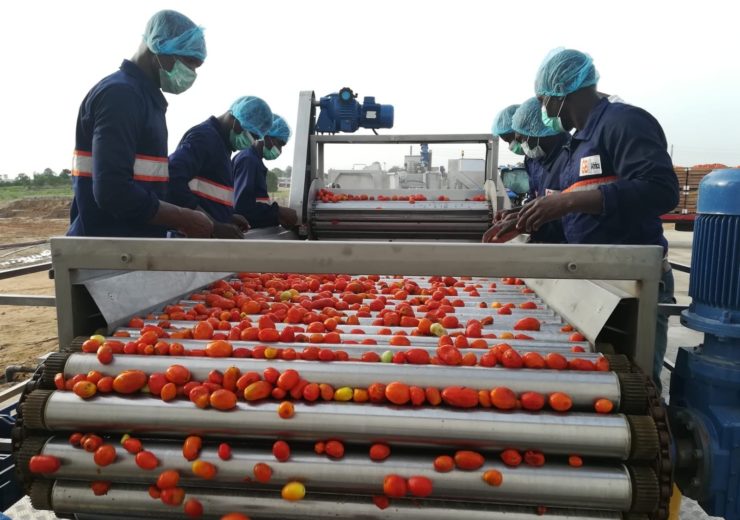 The facility was built in partnership with Central Bank of Nigeria (CBN), Kebbi State Government and the Emirate of Yauri.

When all the phases of the project are completed, the factory will be the largest fresh tomatoes processing facility in Sub-Saharan Africa and is considered to be the second-largest factory in the country.

The farm will serve a dual purpose, as it will produce industrial tomatoes in the dry season and soya beans during the raining season.

The fresh tomatoes from the farm will be converted into tomato concentrate which will be used for producing Gino Tomatoes Paste and Gino Tomato Pepper Onion Paste. The soya bean will be used to process soya-bean oil, a critical ingredient in GBfoods’ Bama and Jago Mayonnaise.

GBfoods claims to have trained them on good agricultural practices and provided them with tomatoes seedlings, agrochemicals and other equipment such as water pumps and hose pipes, to enable the farmers to access water during the dry season.

The new factory is touted to be fully backwardly integrated to the farm. It will source most of the tomatoes from its own farm and also from out-growers who will grow tomatoes on their own farms.

The company aims to engage 5,000 farmers as out-growers in the coming tomatoes season.

GBfoods Nigeria country manager Vincent Egbe said: “The opening of this processing factory is a great milestone for us.  It further demonstrates the company’s commitment towards helping Nigeria achieve its food security ambitions, in this case, of self-sufficiency in tomato concentrate production. We will continue to work with the Federal Government towards food security and local production and processing of fresh tomatoes.

“The company is dedicated to reducing pre and post-harvest losses, and also developing the value chain so as to improve revenue streams for tomato farmers.

“Over the past three years, in the three states of Kaduna, Katsina and Kebbi, GBfoods has worked with smallholder out-growers to boost their incomes by providing seedlings, fertilizers, training, and irrigation pumps, further to reduce post-harvest losses GBfoods also provided free plastic crates to farmers.”

Netafim partners with Sentek to distribute soil moisture sensors in US