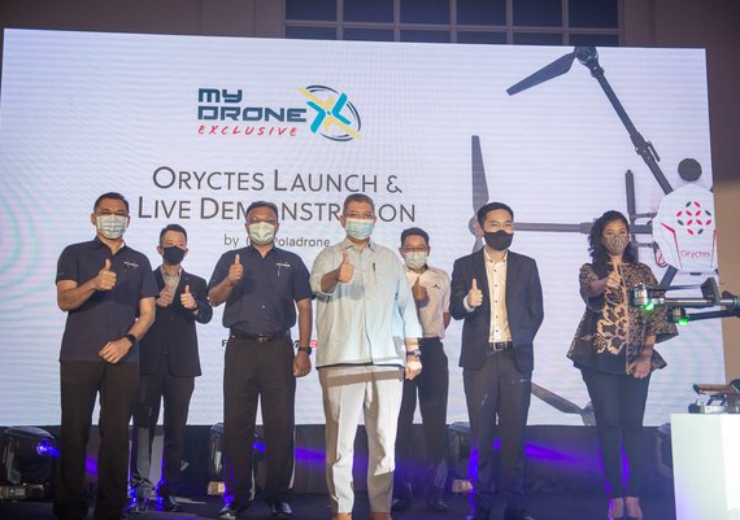 Malaysian drone company Poladrone has introduced Oryctes, which is claimed to be the first precision drone for oil palm plantations.

The precision spot spraying drone has been designed and developed by a Malaysian team over a one-year period. It is the latest development in agrotechnology, which gains profits advancements in unmanned aerial vehicle (UAV) technology.

Oryctes, which is named after the rhinoceros beetle or Oryctes rhinoceros, has been designed to potentially eliminate this agriculture pest that causes significant damage to young oil palm crops.

The 16L drone has the capacity to apply spray fluid with centimetre-level precision at the centre of oil palms. It applies pesticide directly onto oil palm crowns for the protection of growing shoots, which are sensitive to beetle attacks.

The artificial intelligence (AI) algorithms will help the drone to detect and accurately target the centres of palms through via an automated process.

Initially, an aerial mapping drone will survey the land and acquire high-resolution images, Later, the Airamap AI software will assess the image data to detect and arrange the flight routes.

During the last stage, the information will be transferred to Oryctes to help carry out automatic spraying along the planned flight paths.

Poladrone founder and CEO Cheong Jin Xi said: “Drones in Malaysia are often seen as toys for the hobbyist, but their commercial use has skyrocketed in recent years. With the advancements in UAV hardware and software, drones have become easier to operate and much more reliable.

“When developing Oryctes, we intentionally designed it as an entry point to farming automation for local farmers and planters.”

In October 2019, XAG and Bayer have announced that they will develop a new drone-based technology for precision spraying to support smart agriculture in Japan.