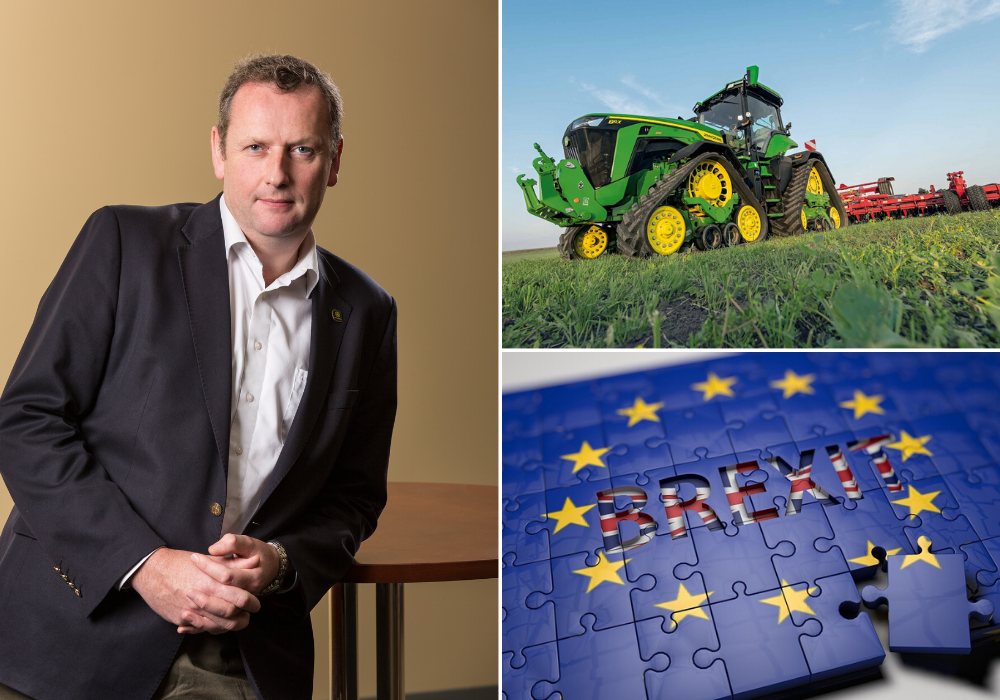 Some farmers may be dreading leaving the European Union, but the UK boss of John Deere has moved to stress there could be ample opportunities presented by Brexit.

While the tractor and combine harvester manufacturer’s UK and Ireland managing director Jonathan Henry admitted agriculture will face new challenges from no longer being part of the bloc’s trade tariffs, he hopes it could open up new export markets after the 31 January exit date.

Prime Minister Boris Johnson put the prospect of a no-deal Brexit back on the table last week when he introduced a new law that prevents him from extending negotiations with the EU on a trade deal beyond the end of 2020.

If the UK leaves without such a deal, it would trade with union members on World Trade Organisation terms, something that has attracted major opposition from large parts of the industry, led by the National Farmers’ Union.

But Henry claimed some businesses are actually “quite excited” because those tariffs could create opportunities in fresh produce and perishables.

“They are already seeing retailers sourcing more from farmers, even now in preparation for what might happen, so they have a more robust supply chain,” he told NS Agriculture in a wide-ranging interview that also covered the future of farming.

“Further down the road, no one knows for certain what might happen, but the speculation is that the UK would then look for trade deals or allow lowest-cost sourcing so we can just buy what we need.

“That would then put UK agriculture in a position where it would need to be able to compete.”

Jonathan Henry on the impact of Brexit on agriculture

Henry, whose company is based in the US but counts Britain as one of its biggest markets for selling farm machinery, highlighted figures for total income from farming, which is known in the industry as TIFF and accounts for the overall net profit of UK agriculture.

The Department for Environment, Food and Rural Affairs (Defra) publishes forecasts and results for this metric.

Henry said this is because manufacturing – which agriculture is closely aligned to – is one of the few industries to benefit from a weaker pound.

Before the referendum, the pound to euro rate was €1.32, while also reaching highs of $1.50 against the US dollar.

Last week, even after a brief upturn following the general election, those rates were at €1.18 and $1.31 respectively.

“We have actually seen the uncertainty that the country is under has actually benefited UK agriculture in most cases over the past two-and-a-half years,” said Henry.

“It has been stronger since 2015, but not quite as strong as it maybe would normally have been.”

Jonathan Henry on the opportunities Brexit creates for agriculture

The seeds planted by the referendum open up some big challenges for the UK after Brexit, though, as it looks to compete against EU countries in new international markets.

Henry said: “The question is, what will UK agriculture have to compete with in the future? Because today, it is protected by the EU.

“In a post-EU world, it’s very possible that UK agriculture will have to compete with global lowest-cost producers and ensure that it is set up to be globally competitive, because that is going to be an essential component of sustainability of the future.”

While this might create a sense of dread for British farmers, Henry points out there are opportunities for the industry after the end of January.

According to the British Meat Processors Association, the UK currently imports about a third of the sheep meat it consumes – 100,000 tonnes.

While it’s a net exporter for this product, the opposite is true for almost every other agricultural sector – meaning there could be an opportunity to grow exports by opening up trade outside the EU.

Arable and dairy productions are two particular areas where Britain can eventually be globally competitive, Henry believes, but technology will play a key role.

“Many of the technologies that are in play in countries like New Zealand, where it is competing on a global platform without subsidies or intervention, are transferable to the UK,” he added.

“They could actually offer a higher economic advantage to UK producers than New Zealand ones.

“So I think in those segments, there are definitely opportunities and it means that farmers will look to make sure that we’re not in a low-cost labour country.

“So, therefore, they’re going to have to make sure that they’re using mechanisation, data and digital – and they’re taking the maximum advantage out of those things to make them globally competitive.”